Match points set Academy up for a Turraĺ cup coup 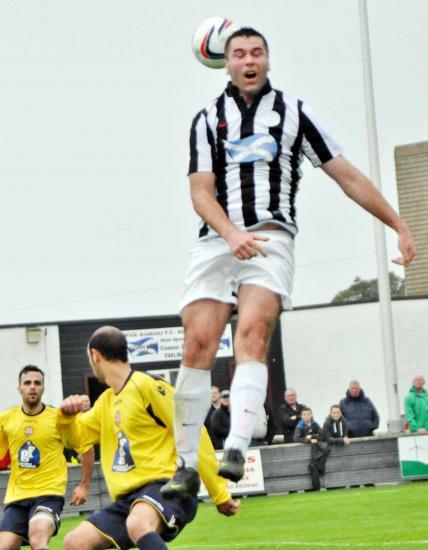 WICK ACADEMY got the best possible boost in advance of their crucial, second round, Scottish Cup tie with Turriff, on Saturday - an emphatic 5-2 dispatch of Lossiemouth, in the league.

However, as the scoreline suggests, the Scorries didnĺt have it all their own way on their home ground.

They went on the offensive from the word go, only some good work from the Coastersĺ keeper, Errol Watson, denying them their opener.

Academy didnĺt have long to wait for it, though, Gary Weir giving the keeper no chance in the ninth minute and the flood gates were open. A Lucas Geruzel header on the 20th minute was followed by No 3, from Richard Macadie, pouncing on a rebound.

Lossie appeared to have no answer to Wick's scintallalating supremacy but hung in, and got their reward in the 41st minute, through a long-distance shot from Ryan Farquhar.

The visitors pulled another goal back in the second half, courtesy of Callum Dunbar, aided by a lucky deflection and the possibility of a draw must have loomed large, until Academy put a points share beyond them, with goals four and five from defender Alan Farquhar and a second from Macadie. James Pickles - his brother John was on the bench - lifted another Man-of-the Match award and was cheered on by a group of fellow islanders in the south stand.

The win saw Wick retaining their third place spot in the league table and in good fettle for that all-important Turra tournament.