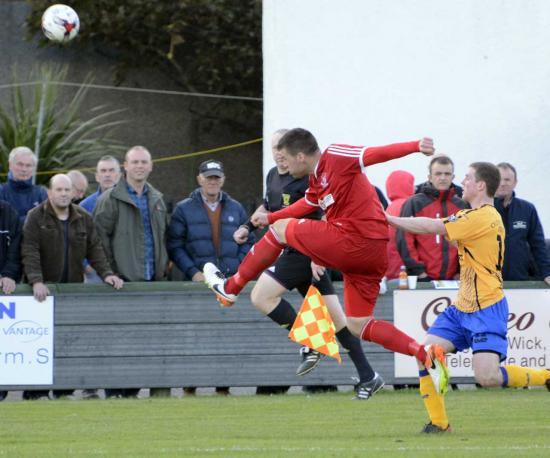 Given the effort put in by the two sides, though, a draw was probably a fair result.

The Scorries got off to the best of starts, Sam Mackay putting down a marker in the opening minutes with a well-aimed ground shot past the advancing 'vale keeper. What appeared to be an own goal put the visitors on level terms.

Academy had a chance to take the lead through a penalty. The keeper didn't gather the ball first time, but secured it before Richard Macadie could pounce on the rebound. Davie Allan looked like he might have made it 2-1 but his efforts forging his way through the centre, didn't bear fruit.

It was in fact 'vale who took the all-important lead before half-time, courtesy of Paul Sutherland, leaving Academy with it all to do in the second period.

Again the Scorries came from behind, with Sam Mackay making no mistake from the spot. Some excellent pressure by his side produced a late strike in the closing stages but the celebrations were cruelly stiffled when it was ruled offside..

Earlier, Harmsworth Park took on a festive appearance in the autumn sunshine, as Academy's new away strip was feted.

The strip, incorporating the colours of the Caithness flag, was the result of a competition held by Academy, inviting primary school children in the county to come up with a design.

There was an "overwhelming" entry of more 300. The winners were Isaac Seddon from Noss Primary's P3 for the jersey and Matthew Laird a P5 pupil at Mount Pleasant Primary's P5 class, who designed the shorts and socks..

The new kit was officially launched by Anne Dunnett, the county's Lord Lieutenant, and the two pupils had the honour of wearing it, as they were piped onto the pitch.

Academy's new strip will have its first outing at Forres when they meet Mechanics on Wednesday night. The Scorries are keeping in touch with the league leaders in sixth place. Top are Buckie with 31 points.

Wick Academy 0 Fraserburgh 1 Reporter Noel Donaldson ACADEMY supporters' hopes were doubtless high that the miracle mid-week comeback by their team against Forres Mechanics, would be the catalyst to getting to grips with their home results jinx.   In the event, the encounter with a well-marshalled Broch outfit was something of an anti-climax, Academy unable to replicate anything close to that scintillating 5-3 performance - underlining their inherent lack of consistency and failing to secure a draw even, in a game that was no classic.
[Football]
4/9/2016