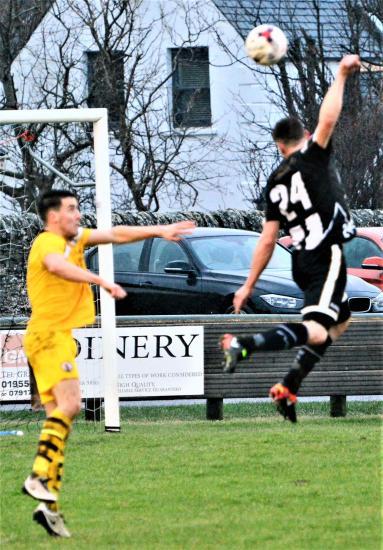 THIS was a day more suited to those with webbed feet rather than footballers but both sides defied the elements and gave their fans their money's-worth.

The Scorries, building on their return to form, but without key personnel, Alan Farquhar and Davie Allan, drew first blood early in the uncompromising wind and rain... with a little help from an opponent.

Steven Anderson homed in on the visitor's goal in a fine solo run down the left in the opening minutes. His strike looked as if it caught a deflection on the way but it ended up in the net and the scorer deserved the credit.

The initiative frequently changed hands during the 90 minutes and there were no surprises when the Can-Cans got back on track, the leveller courtesy of Stuart Soane in the 26th minute. The ding-dong battle continued with Richard Macadie capitalising on a rebound off the Forres post to slide the ball home in the goalmouth, to put Wick ahead again.

Gordon Connelly's old club were not to be denied, however, and eight minutes from time, grabbed a well-earned share of the points, the persistent Garry Tweedie finding the net.

As in all football matches, the game wasn't free from controversy with some Academy supporters frequently issuing advice to the ref in no uncertain terms, that in effect, a visit to Specsavers might do wonders for his powers of observation.

Verdict: It was an encounter that either side would have deserved to win, with chances going a-begging at both ends. A share of the points was probably a fair outcome although Forres being currently on a roll, will have been disappointed not to have headed over the Ord with all three points.