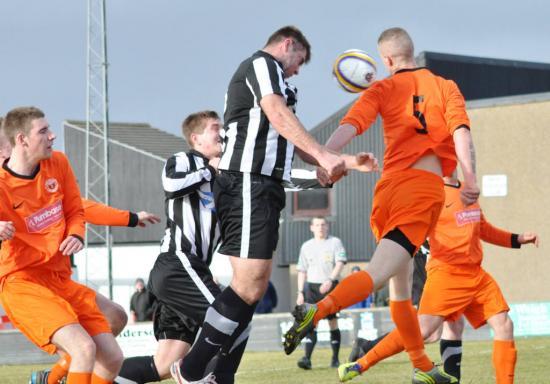 IN Academy’s race to the league title finishing post, as much, it would appear, depends on the outcome of the chasing packs’ results as the team’s consistency.

And the latter seemed to have gone out of the window on Saturday, in what should have been a dawdle for the Scorries had they been on their usual form. Had it not been for Gary Weir’s 24th minute lifesaver, there might have been a few red faces in the Academy camp and quite a few even more discontented fans.

The joy of the pre-match announcement that manager Barry Wilson had extended his current end-of-season contract by two years, lost some of its gloss, as the Fort swung into action almost from the word go and nearly scored.

And if it had, it might have spurred the Fort on to a draw..or, all the unthinkable, all three points! Continuing the speculation, had Wick been up against more formidable opponents, I shudder to think what they outcome might have been?

Well, let’s stick to the facts, because Ft William didn’t win or grab a share of the points, despite demonstrating that they know how to keep possession and can create chances, and Wick slogged out their win to remain top with a five-point lead.

But one indisputable fact remains, the performance fell surprisingly short of what club and fans expected, particularly coming hard on the heels of the Scorries' present form and Wednesday’s scintillating performance, and, although, not a crucial factor in the big scheme of things, left sports reporters struggling to find highlights. Does it matter, how Wick win their games so long as they do?

Of course it does, because if Academy allow their standard to drop at this stage and fail to sharpen up their finishing and outlaw slopping passing, remaining games are likely to have regrettable consequences. Hopefully, Wednesday’s cup clash with Brora will concentrate minds and prove an incentive injection –if any was necessary in a derby encounter - that will put the Academy title train back on track after its wobble.

I was disappointed to see Lukasz Geruzel was subbed. The big man consistently makes life dificult for the opposition and he must feel aggrieved that his chip over the keeper spun towards the far corner, only to be cleared off the line.