Blue do for Lilywhites – Pole-axed by Lukasz 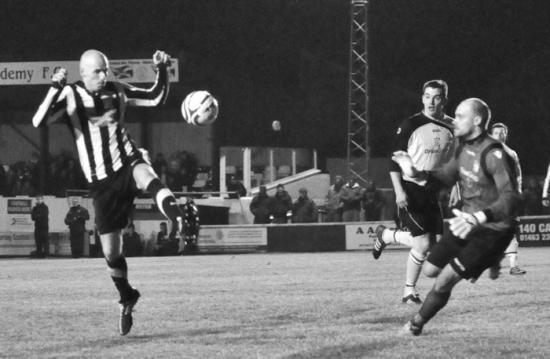 Watch Highlights at the bottom of this page.

THE Poles have a word for it...olsiewajacy. It means dazzling, devastating, or incandescent and certainly, stand-in striker Lukasz Geruzel shone as bright as the Harmsworth Park floodlights as he dazzled visitors Clach with his devastating play.

The six-foot-foot giant again demonstrated that his talent is by no means confined to his stature as he notched up an impressive hat-trick before an above-average crowd, to send his team back to the top of the Highland League table.

The big fella was paired with opening scorer, Gary Weir, up front, for the first time and certainly put down a marker for the job.

Academy showed their depth of talent, dispatching the Lillywhites with an emphatic 4-0 demolition, the Scorries minus key regulars Richard Macadie, Davie Allan and Alan Farquhar.
Academy gave the visitors the old one-two in the opening gambits and Geruzel consolidated the comfy lead with his second goal, leaving with field with his team, at half-time, a gratifying three-nil in the lead.

Fast-breaking Clach were never out of the game and made Academy work for their three points. Had the home defence not been on the ball and Michael Gray not been on top form, the final score might not have looked so one-sided.

No prizes for guessing who made it 4-0...that man Geruzel.

Scorries manager, Barry Wilson came out of the dugout or a stint, in the final stages and, despite being landing on the ground, managed to prod the ball into the path of the Pole to put the hat-trick icing on his cake.