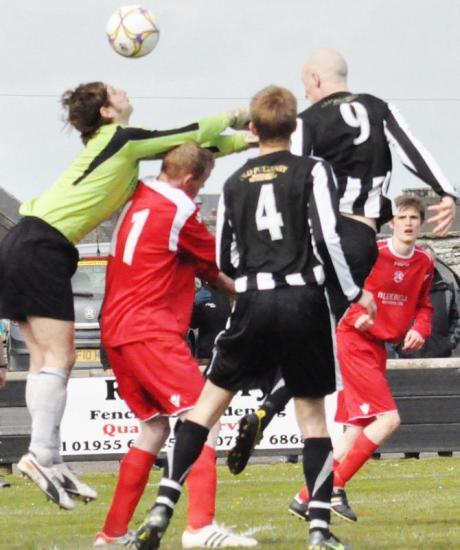 Scorries' second half form nets all three points - Reporter Noel Donaldson
Wick Academy......3.......Lossiemouth.......0....... (h.t. 0-0)
THIS was the proverbial game of two halves...the second containing the entertainment and more important the goals for the home team.
The first half was a lack-lustre, slogging, affair with the Scorries scorning the chances that came their way which might have returned to haunt them had the Coasters managed to emulate Wick's second half form.
It was 16 minutes into the second period before the fans began to get value for their admission charge, Sam Mackay slamming home the opener after a fine solo run down the left.

Stewart Ross made it 2-0 after capitalising onto a ball that broke to him, a few minutes later and Richard Macadie compounded the visitors' misery by adding the third to the score sheet, close to time. Again in the second half, chances went abegging and Academy could have doubled their final tally could had they been taken.

Mackay picked up a well-earned, Man of the Match award after the win which stretched the Scorries' unbeaten home run, to 10 games. The Lossie scalp was doubly satisfying for manager Davie Kirkwood, on a day it was announced, he has signed an extension to his contract at Harmsworth Park.