40 years of failure: can sport and leisure bridge the empathy gap?

This article in "the leisure review" talks about what has happened in England but applies to Scotland also.   Are we failing here also to involve everyone? After a long career in sport and leisure Martyn Allison offers a personal perspective of a sector that, for all its achievements, has failed to recognise or address its biggest challenge.
17/9/2018

Physical activity is good for you

A research study published in the Lancet reports that physical activity can have a significant impact on mortality rates.  The findings will come as a surprise to almost no one but the study, which is the first to explore the relationship between heart disease and physical activity in nations of differing levels of affluence, will add to the weight of evidence supporting investment in physical activity promotion as part of the UK government's efforts to promote healthy lifestyles.
17/9/2018

Women and girls in sport board reveals work plan

The group advising the Scottish Government on getting more women and girls physically active and into sport is to focus on the particular barriers to participation that affect different groups.   The Women and Girls in Sport Board, which is made up of representatives from sport, business and the media, has set out its work programme and also revealed its new brand and visual identity.
14/9/2018 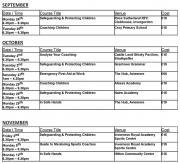 Highlife Highland have an increasing range of courses aimed at coaches and anyone involved in running groups.   More new course are being added all the time so keep and eye on the Calendar HERE.
4/9/2018

The next hub meeting is planned for Tuesday the 25th of September 2018, 6.30-8pm in East Caithness Community Facility's dance studio.  Please find the next meeting's agenda attached; the previous presentation from Katie Matthew's and the meeting notes from the last meeting.
30/5/2018

Following recent community engagement on the establishment of an East Caithness Community Sport Hub, we are delighted to announce that the Hub's first meeting will be in held in Wick.   Sportscotland Partnership Manager, Garry Reid will officially open the Hub's first meeting which will be chaired by Katie Matthews, Community Sports Hub Officer for the North Highlands.
19/3/2018

Five University of the Highlands and Islands students have been awarded scholarships from international golfing organisation, The R&A.   Jamie Macintosh (18) from Inverness, Kieran McCormick (18) from Glasgow, Michael Schinkel (20) from Kirkwall, Alistair McNaughton (20) from Paisley and Riccardo Cellerino (23) from Italy have each received between £750 and £1000.
28/1/2018

An article in the Mail on Sunday has highlighted a move for Castle of Mey Highland Games to hold the first ever events for athletes with a disability.   Hammer throwing and tossing the caber inspired by Alex Armor and ex US veteran.
14/11/2017

The partnership organisation to support companies operating in the mountain biking sector has received new backing from the Scottish Government.   Tourism Secretary Fiona Hyslop has announced £50,000 for the Developing Mountain Biking in Scotland project for the coming year, to help them deliver on a national strategic framework for mountain biking.
31/10/2017

The club will shortly open new floodlit tennis courts to add to the facilties so think about joining now..
[Kook Sool Won]
27/8/2017

The Thurso group of Kook Sool Won put on a demonstration for the crowd at Marymas Fayre on Saturday 26th August 2017..
[Highland Games]
29/7/2017

Get The Kids Swimming At Pools in Thurso and Wick

Wick Academy 2 Formartine United 2 ACADEMY shook off their recent poor form to grab a well-earned share of the points on home turf against one of the Highland League's strongest sides, in the final of the season at Harmsworth Park, on Saturday.   Quick- moving United monopolised the early play and were rewarded with a lucky Scott Ferries strike in the 10th minute which crept over the line after a deflection.