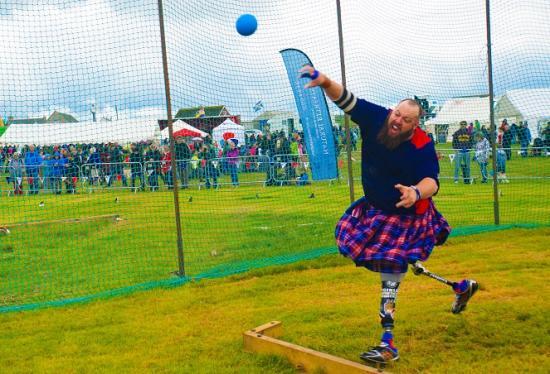 Following last year's new World Records, athletes from around the world are preparing to raise the bar even higher.

Competitors from around the world are in training to attend the Mey Highland Games 2019, including adaptive athletes from across the UK, the United States and Australia.

Last year, Mey Highland Games became the first event of its kind to introduce para-athletics to a range of events including the traditional Heavies. The addition proved a huge success, with competitors commenting on the fantastic support of the crowd and the special atmosphere of the Games.

Help for Heroes - the charity supporting injured veterans - last year brought together a team of a dozen men and women from all over the UK, including wounded and injured veterans and Serving personnel, to compete at the Mey Highland Games. The visitors enjoyed a taste of north Highland culture with an evening reception at the Mackays Hotel on the eve of the Games, and arrived at the Games dressed in full kilts and rearing to go. This year, Help for Heroes has pulled out all the stops, with more than 40 competitors travelling to Caithness from across the UK.

Also making a return trip to the Games are Uncle Sam's Highlanders, who smashed two World Records last year. Uncle Sam's Highlanders is a non-profit organisation set up by Alexander ‘the Tank’ Armor with the specific mission of introducing Adaptive Games to Scotland. After receiving his invitation to the 2018 Games, Alexander Armor - a US veteran and passionate advocate of adaptive sport - put together a team of eight athletes, attendants and support staff (totalling 22 people) to make the historic trip to Caithness.

On the way north, the team stopped at the Dornoch Highland Games, where Crossfit coach and double amputee Matthew Hall became the first amputee to throw on Scottish soil at a competitive Highland Games.

The next day, Mr Hall stunned Mey Highland Games crowds by winning four of the first five events, and setting para-standing world records in the 16 and 22-pound shot.

Beyond the traditional Heavies there are a vast range of competitive events open to adaptive athletes and Ladies - not to mention fun children’s races - in line with the Games’ ethos of inclusion. Lothian Disability Sport is making the journey to partner up with Caithness Archers, and all events will be cheered on by the Games’ official Chieftain HRH Prince Charles.

Continuing the Royal connection, the Duke of Sussex’ Invictus Foundation has partnered with the Mey Highland Games in celebration of its role in celebrating the talent, endurance and achievements of injured servicemen and women.

The Games are also designed to be welcoming to families, with lots of races and entertainment for children. The Games are a wonderful introduction to Highland hospitality and culture, hospitality and talent of the people of Caithness. We very much look forward to providing a warm welcome to guests from around the world.’

The Mey Highland Games has agreed received a major sponsorship package totalling £15k with from the Nuclear Decommissioning Authority (NDA), the executive non-departmental public body responsible for the safe clean-up of the UK's earliest nuclear sites.  NDA is a major contributor to the economy of Caithness, which is home to Dounreay, and Mey Highland Games is the latest local organisation to benefit from NDA support.