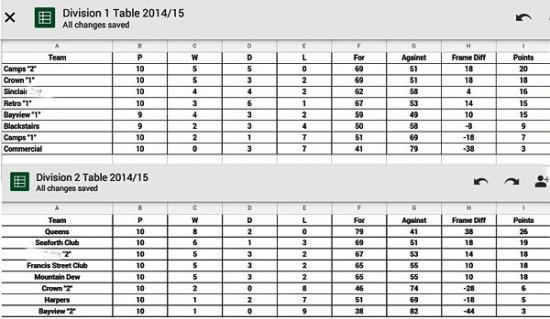 Camps2 have moved to the top of division one after a hard-fought 7-5 win against Crown1 in week ten of the Wick & District Pool League season. With the match tied at 2-2, an outstanding total clearance by Alec Thompson put Camps2 ahead at 3-2 and on their way to victory. The defending champions went on to take a 6-3 lead, but great play from Alan Larnach and Stevie Cunningham helped keep the Crown in the match at 6-4. David Hendry and Derek Johnston combined well in the next doubles frame for Camps2, with Hendry cutting in a tough black to clinch the win. Sinclair Bay climb to third in division one as they became the first side to defeat Retro1 in league play this season.

The Keiss side took an early 3-0 lead, but Retro weren't going to make it easy for them as they battled their way back into the match. Sinclair Bay were 6-5 ahead going into the final frame, and would go on to win all three points thanks to fine play from Greg Simpson and Andrew Mackenzie. Camps1 earned an important victory in their quest to avoid relegation, as they secured a 9-3 win away to The Commercial. Suzanne Carter's side got off to a flying start and raced into a 5-1 lead, before Robert McLeod and Calum McDonald pulled one back for the Lybster team. That's as far as the comeback would go as Camps1 put their foot down to win four of the remaining five frames. Darren Miller and Robbie Powell were the standout players for Camps1 as they both won all of their games.

Craig Durrands Seaforth Club side moved up to second place in the second division thanks to an 8-4 win against Bayview2. The Lybster side put in a very good performance but the club side proved to be stronger on the night. The Queens opened up a seven point lead at the top of division two after yet another impressive display, as they defeated Harpers 8-4. The Francis Street Club and The Mountain Dew also recorded 8-4 victories, over Retro2 and Crown2 respectively. Danny and Michael Innes were the star players for FSC as they won all of their in impressive fashion.

Bayview1 vs Blackstairs to be played on Sunday.