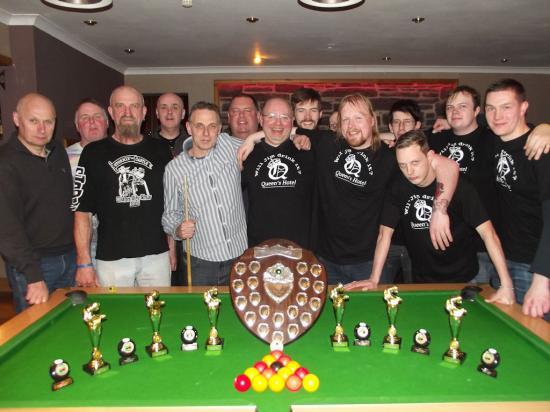 Steve Atkins' Bayview1 side have won the 2015 Rockwater Shield for a second time after a hard fought victory over the Queens Hotel. The team from Lybster, having previously won this knockout competition and having been strong contenders in league Division One were most people's strong favourites going in to the final against newly promoted Wick side Queens Hotel and indeed ran out 6-1 winners.

Played in the Blackstairs Lounge, the match itself was, despite what the final score would suggest, a close affair. Angus MacKay got the Bayview off to a great start, taking advantage of opponent Jim Bain's unfortunate in-off foul shot, by compiling a total clearance. Each of the subsequent frames followed the same pattern where the Bayview's strong start was pegged back by some dogged play from the Queens players.

With wins for Ted Gunn, Steve Atkins and Billy Ackland, Bayview 1 went 4-0 up and looked certain to go further ahead when Arthur Bruce finally made a chance to clear his last four balls only for him to unexpectedly miss a tricky pot on the black ball into the centre pocket, thereby allowing Andrew Coghill back to the table to calmly pot his remaining balls and black ball. In the last of the singles Ronnie Simpson made it 5-1 eventually overcoming Adam Scollay.

In the first game of pairs Angus MacKay looked on course to record his second total clearance of the match but ran out of position. After a period of tactical play, the Queens Hotel appeared to have gained the upper hand thanks to a very clever shot from Brian Robertson only for Angus to completely fluke the last red leaving a simple pot on the black ball to hand his team victory. The 33rd Annual Captains Cup event takes place in the Francis Street Club on Saturday 4th of April at midday. Teams can enter their players for this competition by contacting Ryan Carter on 07788477738.

Queens Hotel are this seasons Wick and District Pool League Division 2 champions, having defeated the Francis Street Club in the league decider.  Played in the Seaforth Highlanders Club, this league decider was necessary because both teams finished on the same points with equal frame differences.
[Snooker / Pool]
18/3/2015