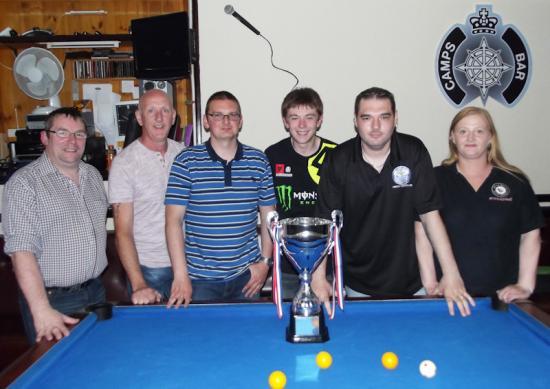 Suzanne Carter's Camps "1" have won the Wick & District Summer Pool League for the second year in a row after a 12-8 victory against Camps "2" in this years final. After a 7-4 first leg victory, Camps "1" needed five frames to win the title, and produced an outstanding performance to become the first team to win back to back summer league championships.

The first frame of the second leg saw Camps "2" captain Bruce Honeyman play well to put his side 1-0 up, but David McGillivray battled hard to level the match at 1-1.

Camps "2" would again take the lead through Willie Alan Mackay, but Ryan Carter won the next frame to make it 2-2. Robbie Powell and Shane Honeyman shared a frame a piece in the next matchup, before David Hendry knocked in a great 8-ball clearance to once again put Camps "2" a frame ahead. Alan Gibson won the next frame to tie it at 4-4 meaning one more game would seal the championship for Camps "1".

Having already won the Player Of The Season award, Ryan Carter got the better of Mackay in the next frame to round off an outstanding season and win the cup for Camps "1". This brought to an end a thoroughly entertaining and exciting season, with some great teams giving it their all to the very end. Retro put in a strong showing this season, but narrowly missed out on a place in the final on frame difference.

A Camps Bar derby contested the final for the first time, and as expected both teams played to an extremely high standard in an exciting final. Ryan Carter won a clean sweep of trophies this season, winning the championship, Player of The Season, and most 8-ball clearances. Bruce Honeyman also had a great season and was the runner up player of the season. This win proved to be a big achievement for Camps "1" captain Suzanne Carter, as she is the first female in the county to win two major titles.