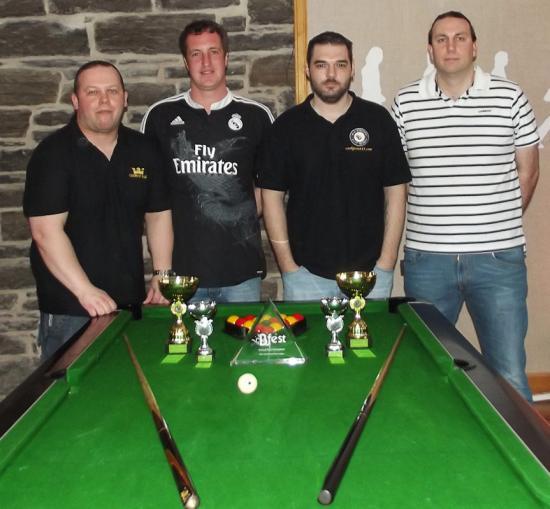 Camps Bar "2" players Ryan Carter and Bruce Honeyman have won the Bfest Annual Pairs Championship for the third year in a row. The Blackstairs Lounge hosted the weekend event, where teams had to qualify from the group stages to make it through to the semi finals on the Sunday. In group A it was Hamish New and Darren Goodwill who would combine well to top their group and qualify in top spot.

Colin Banks and Alan Stewart, who were representing the Crown Bar, played extremely well on the Saturday and they went on to secure their place in the semi finals. Tam Sutherland and Greg Thompson were in outstanding form on the Saturday and thoroughly deserved their spot in the knockout stages, as they qualified from group B. In a very tough group, with strong teams from Retro, Queens and Blackstairs, it was the defending champions Carter and Honeyman who grabbed the other qualifying place to set up two exciting semi final matches.

Banks and Stewart made it to their first ever Bfest Pairs final, as they made quick work of their semi final match to beat Sutherland and Thompson 6-0. Carter and Honeyman also won their semi final comfortably with a 6-1 win against New and Goodwill, which set up a Camps versus Crown final.

The opening frames of the final were tight affairs, as the camps pair held a slight lead at 3-2. Carter and Honeyman then took complete control of the match as they played some superb pool to win the next four frames for a 7-2 win and their third straight Bfest Pairs Championship.

The Wick & District Summer Pool League got underway on Monday night, as defending champions Camps "1" got off to a winning start after a hard-fought 7-5 victory against a tough Commercial Side.   Ryan Carter, making his debut for Camps "1", won all three of his frames to help his new side earn a 6-5 lead going into the final frame.
[Snooker / Pool]
10/4/2015