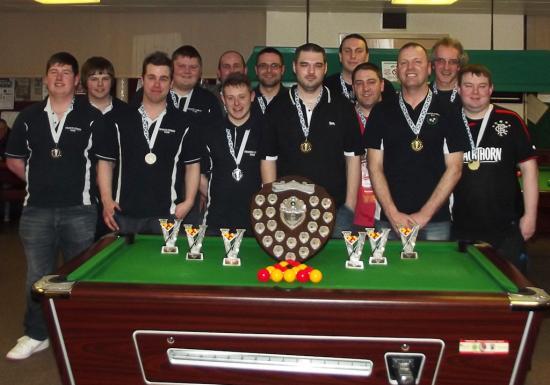 Camps Bar "2" have completed the league & cup double after defeating The Francis Street Club 6-4 in this seasons Rockwater Shield Final. Danny Innes and Ryan Carter got the final underway and both played some great pool, but it was Carter who edged it after escaping two snookers to give the Camps side an early lead.

Ricky Hernandez and Michael Mackay helped put the club side 2-1 ahead, before a great display from Alec Thomson leveled the final at 2-2. Brian Munro and Graham Harper have played some great pool this season, and continued their form as they helped the Francis St Club take a 4-2 lead, and two frames away from victory.

The experienced Camps team have found themselves in these situations many times over the years, and a gritty display saw them win four doubles games in a row to win their seventh Rockwater title. Alec Thomson and Ryan Carter were the outstanding players in this years final, as both players won all of their games.

Retro will host the 2014 Captains Cup on Saturday April 5th, and teams must enter their players by April 4th at the latest. Contact Ryan on 07450993155 to enter, or if you have any queries.