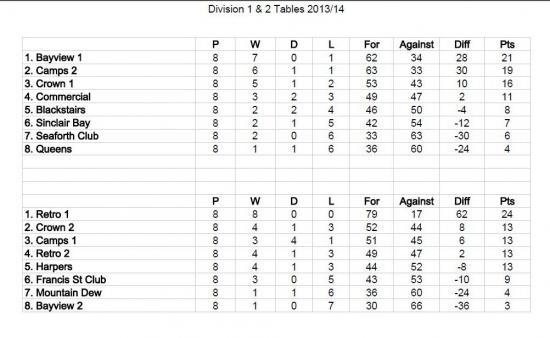 Graham Harper's Francis Street Club side are the only second division team left in Wick & District Pool League's Rockwater Shield as they knocked out first division side Seaforth Club on Monday Night. A great team performance helped them to a 12-5 aggregate win as they progress to the semi finals where they will me Lybster side Commercial.

George Zindilis' Comm team had won their first leg tie against Mountain Dew 6-2 and didnt falter in the second leg as they went through 12-7 on aggregate.

Alan Larnach knocked in a total clearance for Crown1 as his side went through 12-6 against Retro2. They will meet six time champions Camps2 in the semi final, after they knocked out last years winners Blackstairs. Darren Goodwill's fantastic 8-ball clearance got the defending champions off to a great start in the first leg but Camps2 won 6 in a row to leave the Blackstairs team with a mountain to climb in the second leg. The Camps side won two of the first three frames to make sure of their place in the semi finals.

League action returns next Monday where the big match in division one see's its top two teams face off as Bayview1 host Camps2.