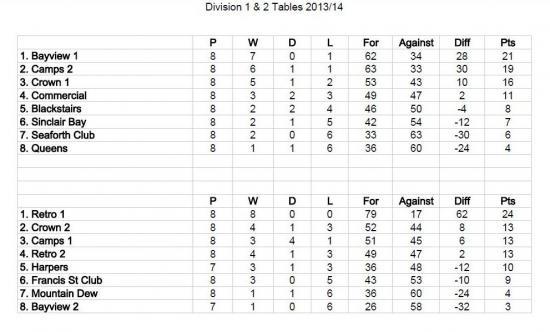 Suzanne Carters Camps side got off to a great start leading 4-2 after the singles and 6-3 after the first set of doubles. The Crown lads battled back to reduce the deficit to 6-5, but Carter and David McGillivray won the final frame to secure a 7-5 win for Camps1. Retro2 continue to impress in their debut season and now join Crown2 and Camps1 on thirteen points after their 7-5 win against the Francis Street Club. The club side were leading 5-3 but a spirited comeback from Retro2 saw them reel off four frames in a row to take all three points.

In division one Bayview1 continue to lead the pack as they earned a 9-3 win over Lybster rivals Commercial. Arthur Bruce knocked in an 8-ball clearance for Bayview. Camps2 remain two points behind the leaders in second place thanks to an impressive 10-2 win over the Queens. Craig Durrand's Seaforth Club side moved off the bottom of the table thanks to a 8-4 victory over Sinclair Bay.

Durrand and Kevin Beales got the club side off to a good start before Gordie Steven and Greg Simpson leveled the match at 2-2. Some fantastic pool saw the Seaforth side win the next five games in a row to seal the points. Crown1 battled to a 7-5 win against Blackstairs in a close match and are third in division one.