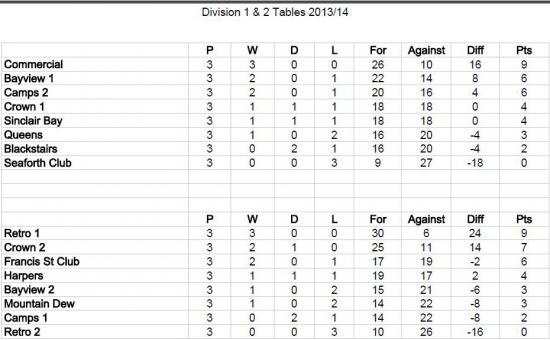 The Commercial remain top of Wick & District Pool Leagues first division as they kept up their 100% record after defeating Blackstairs 8-4 on Monday night. Gavin Mackay and John Mcgill were the outstanding players of the night, helping the Lybster side get the better of last seasons Rockwater Shield champions.

Ryan Carter and Ian Mcdonald both completed superb 8-ball clearances to help Camps2 win the three points against Alan Larnach's Crown1 side. The seven time champions won it at 7-3 but some good play from Stevie Wyllie and Stevie Cunningham reduced the deficit for a more respectable 7-5 scoreline.

Bayview1 built on their win against Camps2 last week, as they swept aside The Seaforth Club with an impressive 10-2 scoreline.

The Queens side put in a great shift as they secured their first win of the season, winning 6 frames in a row to defeat Sinclair Bay 7-5.

Retro1 recorded their third 10-2 victory in a row and remain at the top of division two. They defeated Retro2 in the bars first ever derby match.

Crown2 hosted the Francis St Club on Monday night as both teams looked to maintain their unbeaten records. An impressive display from the Crown team earned them a 10-2 win and they now occupy second place in division two.

Camps1 were 6-3 ahead on Monday night, but a determined Harper's side fought back to earn a point in a well contested match.

Bayview2 played some fine pool as they grabbed their first win of the season thanks to an 8-4 away victory against Mountain Dew.

Teams will take a break from league action in the next two weeks, as the first round of the Rockwater Shield gets underway. The pick of the first round ties are Crown1 versus Retro1 and Bayview1 against holders Blackstairs.