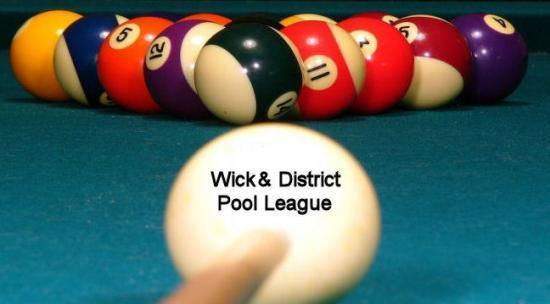 The 2013/14 Wick & District Pool League season got underway on Monday night, with the Lybster derby between Bayview1 and The Commercial the pick of the ties. Raymond Gunn was the star player as he won all three of his games to help The Commercial cruise into a 7-1 lead. Alistair Young knocked in an 8-ball clearance for Bayview, but it was the Commercial who took the three points with a 8-4 scoreline.

Camps2 started their quest for an 8th league title with an away match against last seasons division two winners Queens. A hard fought match ended in an 8-4 win for Camps2.

Blackstairs1 and Crown1 could not be separated on Monday night, with both teams earning a well deserved point in a 6-6 draw.

Sinclair Bay got their season off to a great start as they secured a 7-5 win over the Seaforth Club.

The Francis Street Club's return to the Wick & District Pool League could not have turned out better, as they beat Retro2 7-5. Tam Sutherland got a total clearance as Retro1 thumped the Mountain Dew 10-2 in a one sided match.

A fast paced match between Camps1 and Crown2 ended 6-6, which was the first ever draw in the pool leagues history.

Angus Burt (Crown2) and Ciaran Duffy (Camps1) were the outstanding players in this match.