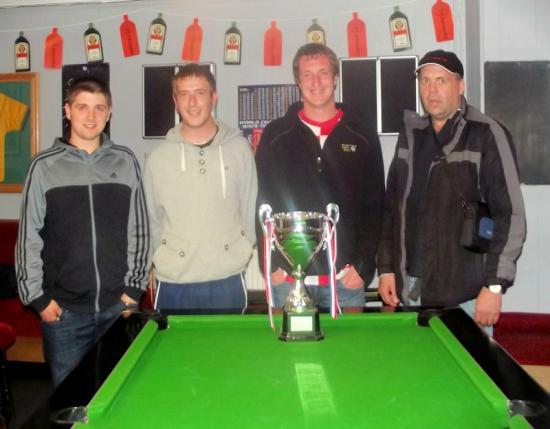 Queens2 were presented with the Summer Pool League trophy on Monday night after their 7-3 victory over Lybster side Bayview. Tam Sutherland and Scott Risbridger played well in the early stages of the final as they helped their Queens side take a 4-0 lead. Both doubles frames were shared, before Bayview captain Steve Atkins pulled it back to 5-2. The next frame saw Alan Stewart grab the glory with some good play to clinch the Queens side the summer title.

Gavin Simpson, Jordan Tait and Milky Ronaldson were all in great form for Sinclair Bay as they helped their side take a 3-0 lead in their third place play-off match against Camps2. Six of the next seven frames went the way of the Camps team as they secured third place.

Camps2 player Martin Hill won the Player Of The Season award, edging out team mate Ryan Carter by one frame. Andrew Coghill (Queens1) was voted the Most Improved Player, with Suzanne Carter getting runner up after losing out by one vote. Angus Mackay & Martin Hill both made three 8-ball clearances this season to finish joint top of the total clearance leaderboard.