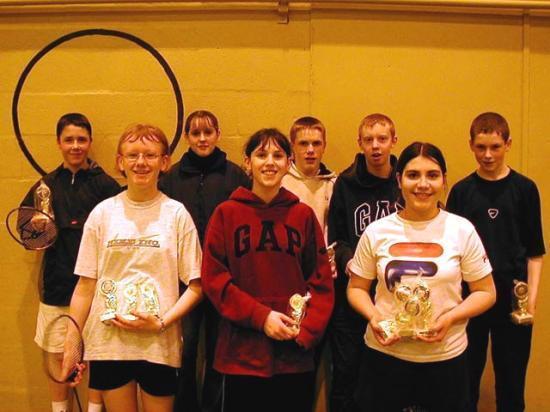 There was an entry of 20 boys and 10 girls from Thurso, Wick, Dunnet, Castletown & Lybster. There were a lot of exciting matches with long rallies and a high standard of play and sportsmanship on and off court.

Stephen Hill from Wick made a clean sweep in lifting all 3 boys section titles, Singles/Doubles and mixed doubles although he was pushed all the way by Craig Gunn.

Full results are as follows

As there was not a big entry all five categories Singles, Doubles and Mixed were played on a round robin basis.   Steven Craigie, Wick took all 3 titles - boys singles, doubles and mixed Kirsty Grant, Thurso took 2 titles - girls singles and doubles.
[Badminton]
24/11/2001