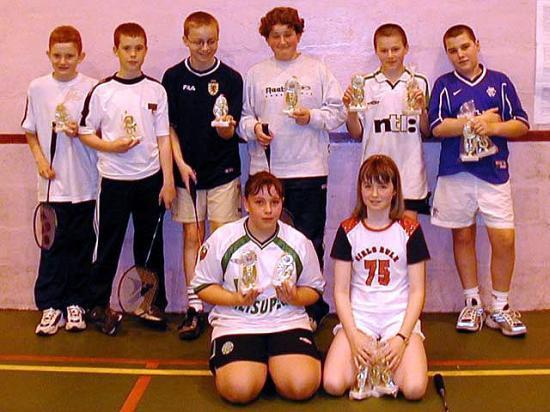 There was an entry of 51 Boys and 10 Girls from Thurso, Dunnet, Wick, Lybster Clubs. Matches were keenly contested with several close games. It was good to see all the kids mixing well and enjoying themselves in the best sporting manner.

The Under 15's will be held next Saturday in Thurso High Games Hall start 1.00pm

(Michael Steven and Louise Campbell are missing from the winners photo)

As there was not a big entry all five categories Singles, Doubles and Mixed were played on a round robin basis.   Steven Craigie, Wick took all 3 titles - boys singles, doubles and mixed Kirsty Grant, Thurso took 2 titles - girls singles and doubles.
[Badminton]
1/12/2001

There was an entry of 20 boys and 10 girls from Thurso, Wick, Dunnet, Castletown & Lybster.  There were a lot of exciting matches with long rallies and a high standard of play and sportsmanship on and off court.