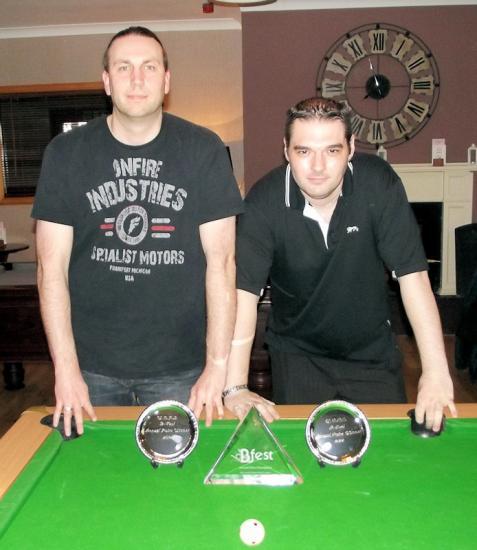 The Blackstairs Lounge hosted a great weekend of 8 ball pool as fourteen teams battled it out for the fourth annual Bfest Pairs Championships. Teams were drawn into two groups of seven, where two teams from each group would qualify for the semi final stage the next day. Queens pair Harry Candeland and James Dow were in exceptional form on Saturday and ended the day top of the group A with eight wins out of twelve.

Colin Banks and Alan Stewart ended the day in joint second place with Sinclair Bay's Jordan Tait and Gavin Simpson, so they would need to play off for a place in the semi finals. Crown Bar players Banks and Stewart played some great pool as they edged out their opponents to book their place in Sunday's semi finals.

Group B was not as close, as defending champions Ryan Carter and Bruce Honeyman dominated their group with ten wins out of twelve to cruise into Sunday's knockout stage. Group B was packed with strong teams like Perry Campbell & Tam Sutherland, George Smith & Scott Risbridger, and Martin Hill & David Hendry. But it was the underdogs Mark Alexander and Lesley Ann Begg who would go on to finish second and qualify for the semis.

Camps "2" players Carter and Honeyman remained in great form and would win their semi final match against Banks and Stewart 6-1 thanks to some excellent finishing. The other semi final was a much closer affair, as Candeland and Dow battled it out with Alexander and Begg in a grueling marathon match. In the end it was Alexander and Begg who clinched a 6-4 win to set up an all Camps Bar final.

The defending champions were big favorites in the best of 13 final, but they were forced to watch Mark Alexander knock in some phenomenal clearances as the underdogs went 4-1 ahead. Carter and Honeyman adjusted their tactics and would win the next four frames, before Begg and Alexander leveled the match at 5-5. The experienced Camps "2" pair took the next frame to lead 6-5 and one frame away from victory. Alexander was close to taking the match to a deciding frame but left the black ball hanging over the middle pocket. Carter then made two tough long shots before sinking the easy black to win the Bfest Pairs Championship for the second year in a row.

The Wick & District Summer Pool League will begin on the 19th of May and all pubs/clubs have until the 5th of May to register their teams. They can do so by contacting Ryan on 07450993155.