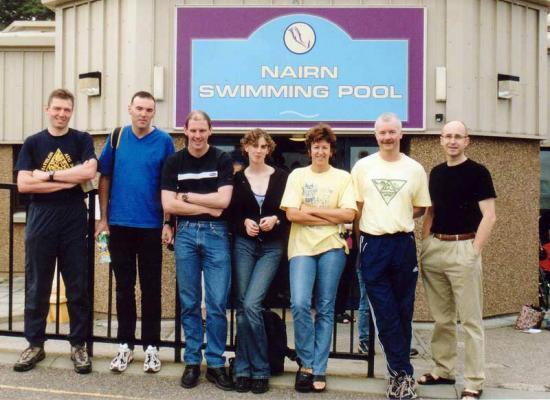 Seven competitors from Wick triathlon club made the trip to Nairn for the Sprint triathlon on Sunday last.

Excellent results were achieved by the Caithness Club for the event consisting of a 500 metre swim followed by a 20 km cycle and, immediately thereafter, a 6 km run.

The strength of the Wick club was apparent by the fact that they outnumbered the home team!

First in for the Wickers was David Sutherland with the time of 1 hour 4 minutes and 34 seconds, far ahead of any other club member.

Another notable performance was a personal best by Gregg Binns who, unfortunately, suffered a bout of sickness immediately after the event, as a result of the huge effort expended.

A terrific tussle took place between rivals Bruce de Wert and Brian Grant with Bruce eventually overtaking Brian on the final part of the run. Only 12 seconds separated Bruce, Brian and Gregg Binns, with Paul Bremner not far behind.

Both ladies of the team provided excellent performances, with Suzanne Calder excelling in the swim stage.

18 individuals and 3 teams took part in the Wick Harbour Triathlon at the end of Wick Gala Week 2013.   The initial swim took place in Wick harbour before the cycling and running in blustery but sunny conditions..
[Triathlon]
5/8/2006

Here are the participants and winners of the Wick Triathlon held on Sunday 6 August 2006.   The results of the 10th annual Sprint Triathlon - attracted 42 individuals and 5 teams.
[Triathlon]
12/8/2000

39 entrants made it to the start in the annual Wick Triathlon.   With a mix of novices and serious contenders the race took place in very pleasant conditions of sunshine and occasional cloud.
[Triathlon]
7/10/2001