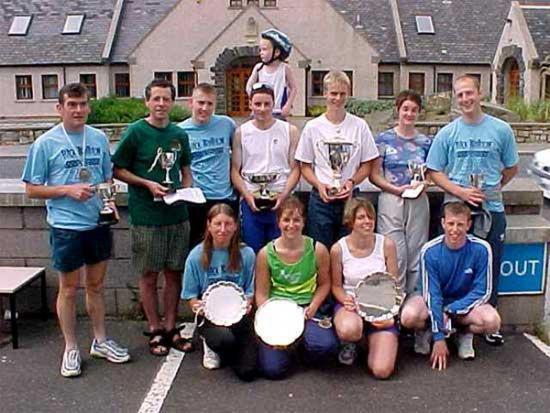 39 entrants made it to the start in the annual Wick Triathlon. With a mix of novices and serious contenders the race took place in very pleasant conditions of sunshine and occasional cloud.

Fraser Cartmel from Elgin won the men's race and Kait Farmer from Wick the ladies race. There were three teams and 8 novices this year. The Wick Triathlon club stage the race every year with support from the council and local traders.

Training goes on throughout the year so if you want to get fit why not get out with them or if you are further away get training to enter in 2001.

18 individuals and 3 teams took part in the Wick Harbour Triathlon at the end of Wick Gala Week 2013.   The initial swim took place in Wick harbour before the cycling and running in blustery but sunny conditions..
[Triathlon]
5/8/2006

Here are the participants and winners of the Wick Triathlon held on Sunday 6 August 2006.   The results of the 10th annual Sprint Triathlon - attracted 42 individuals and 5 teams.
[Triathlon]
29/8/2002