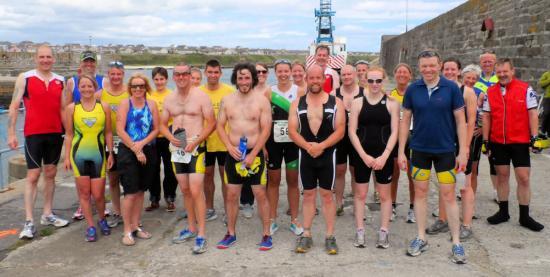 18 individuals and 3 teams took part in the Wick Harbour Triathlon at the end of Wick Gala Week 2013.

The initial swim took place in Wick harbour before the cycling and running in blustery but sunny conditions.

Wick Triathlon Club are holding several events over the next 3 months:- The Easter 10K race will take place on Sunday 20th April.   The route is from Staxigoe Hall to Noss Head and back.
[Triathlon]
5/8/2006

Here are the participants and winners of the Wick Triathlon held on Sunday 6 August 2006.   The results of the 10th annual Sprint Triathlon - attracted 42 individuals and 5 teams.
[Triathlon]
12/8/2000

39 entrants made it to the start in the annual Wick Triathlon.   With a mix of novices and serious contenders the race took place in very pleasant conditions of sunshine and occasional cloud.
[Triathlon]
29/8/2002