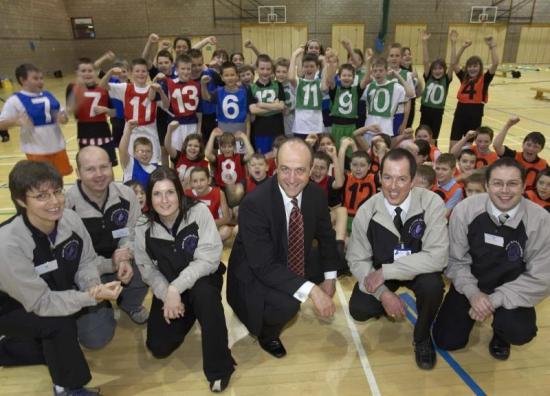 Twenty seven new “Active Schools Coordinators” were welcomed into their new active lifestyle promoting roles in Highland primary schools by the Chairman of The Highland Council’s Education Culture and Sport Committee and the Chief Executive of sportscotland.

Funded by The Highland Council and sportscotland, the Ł975,000 programme will run to 2008. Stewart Harris, Chief Executive of sportscotland, said: "sportscotland is committed to playing our part in the battle to improve health and physical activity in Scotland. Through working successfully in partnership with government agencies, parents, schools and community organisations we are making a significant contribution to tackling this issue. “I am delighted with the success and expansion of the Active Schools Network and would like to congratulate all those involved in the Active Schools Coordinator (Primary) launch in the Highlands. sportscotland recognises the need to establish and maintain healthy, active lifestyles from an early age, which not only contributes to the health of the young, but can also shape their involvement in physical activity and sport in later life.”
Active Schools is being rolled out in all 184 Highland primary schools. The Active Schools Coordinators will recruit volunteers and run a variety of programmes to suit each particular area. The programmes centre on active travel, active play, active curriculum and active clubs.

The role of the Active Schools Coordinator is to provide safe and enjoyable physical activity and sporting opportunities for children and to address target 1 of the Sport 21 Strategy (the National Strategy for Sport in Scotland) by making 80% of children active for one hour a day every day of the week. In secondary schools the target is to increase sporting participation amongst mid teens, particularly girls.

“Already we are seeing an increase in the variety and number of activities taking palace in and around schools. Better communication of information and support is being given to children to enable them to become more active.

“Central to success in making children more active will be increasing, sustaining and developing the volunteer base. This is being achieved by developing strong links with Coaching Highland, Volunteering Highland and through the Community Tops programme. Local sports clubs also have a strong part to play and it is hoped to create pathways to clubs for children to participate in their chosen activities.”

Active School Coordinators will assist with making the links for children from the school curriculum P.E. programme to the opportunities available in out-of-hours time in communities and at clubs.

The Active Schools Coordinators in each area are as follows: