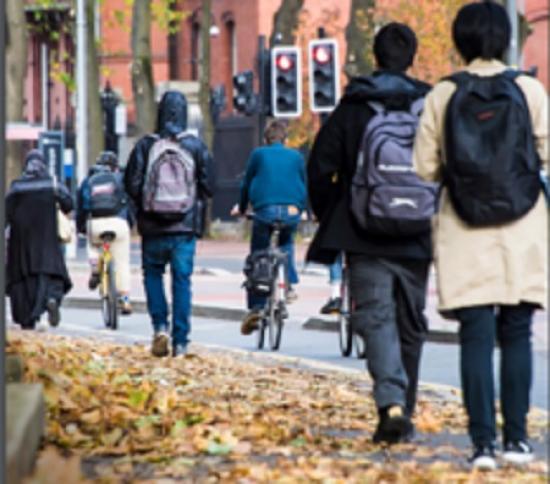 £175 million announced for high-quality cycling and walking infrastructure across England to make local journeys safer for all.

comes as survey reveals nearly 8 out of 10 people support measures to reduce road traffic in their neighbourhood, and two-thirds of people support reallocating road space for walking and cycling

The new money, part of the £2 billion announced for cycling and walking in May, will fund measures including:

‘School Streets', where streets around schools are closed to motorists at school times

low-traffic neighbourhoods (LTNs), where residential side streets are closed to through traffic to stop rat-running

These will give people more opportunities to choose cycling and walking for their day-to-day journeys, as part of wider government plans to boost active travel.

However, the Transport Secretary has set tough new conditions on councils receiving funding, requiring them to ensure schemes are properly consulted on. This will help avoid the problems seen in a minority of the schemes developed in the first round of funding. If these conditions are not met by a council, the Transport Secretary has been clear that future funding allocations will be reduced and claw-backs could also be imposed.

The funding comes as a survey undertaken by Kantar Media last month reveals that 65% of people across England support reallocating road space to cycling and walking in their local area. Nearly 8 out of 10 people (78%) support measures to reduce road traffic in their neighbourhood.

In London, independent polling by Redfield & Wilton shows 19% of people oppose LTNs, 52% support them and 25% are neutral. Surveys are also being conducted of residents in individual LTNs where roads have been closed. The first of these, in south London, found 56% wanted to keep the scheme, against 38% who wanted to remove it.

The multi-million-pound investment marks another step towards the government's ambition to deliver more active travel options in communities across the country and build back greener - benefitting the nation's health and the environment.

Evaluation of early School Streets projects has shown traffic outside schools has reduced on average by 68%, children cycling to school has increased by 51% and harmful vehicle pollution outside schools is down by almost three quarters.

We want to do everything we can to make it easy for people to include some activity in their daily routines - whether that's cycling to work or walking safely to school.

We can see the public's strong appetite for greener and more active travel, and this funding will help ensure the right infrastructure is in place to build truly active neighbourhoods.

It has been great to see so many people build cycling and walking into their daily travel habits. To support them, we know it's vital to have the right infrastructure in place so everyone - cyclists, pedestrians and motorists - can use our roads.

Whether you're walking, cycling, driving or using public transport, people must have the space they need to get around safely.

As part of the Transport Secretary's plan to ensure councils develop schemes that work for their communities, he has set out they must:

publish plans to show how they will consult their communities, including residents, businesses and emergency services, among others

show evidence of appropriate consultation prior to schemes being implemented

submit monitoring reports on the implementation of schemes 6-12 months after their opening, highlighting how schemes have been modified based on local feedback to ensure they work for communities

Local authorities will be required to engage closely with the Department for Transport (DfT) throughout the process - while Active Travel England, when set up, will further assess plans for active travel schemes to ensure they are of the highest quality.

To help councils implement better schemes, updated guidance, which has also been released today, emphasises the need for practical and pragmatic solutions.

Greater Manchester’s Cycling and Walking Commissioner Chris Boardman said:Making it easier for people to get about on foot and by bike is the single best investment that councils can make because it doesn’t just address transport. Time and again, evidence shows that communities that prioritise cycling and walking enjoy major benefits - cleaner air, less congestion, improved health, and even a bigger average monthly spend at local shops and restaurants. Most importantly, it makes our streets happier places to be.

I wholeheartedly support the government’s continued funding of this crucial work. The emphasis on more consultation is welcome too, so that we can ensure the best solutions are put in the right locations. If we get this right, many of these pop-up routes and low-traffic neighbourhoods will become a permanent and valued part of people’s daily lives. The industrial revolution started in Great Britain; now we should lead the green revolution.

Councils will receive funding based on how well they have complied with the criteria set out by the Transport Secretary in July.

In a letter to council leaders outlining the new funding allocations, the Transport Secretary said that while most schemes were of genuine value in promoting cycling and walking, other schemes implemented through the first tranche of funding had made less meaningful change to the status quo.

Mr Shapps said he had in mind many of the pavement widenings put in town centres by many councils using barriers. These, he said, could "prevent pedestrians from crossing the road, cause congestion for buses and motor traffic, and impede access for kerbside businesses," yet were also "relatively little used by pedestrians".

The funding is part of the most ambitious plans yet by government to encourage even more people to choose active travel and build back greener.

Commitments from the plan include making cycle training available for every adult who wants it, setting new, higher standards for cycling infrastructure and boosting access to e-bikes.

As well as promoting active travel, the government is committed to ensuring all journeys are safe and reliable, including for motorists. As part of this, it is moving ahead with significant plans for road upgrades across the country.

£27.4 billion is being invested over the next 5 years through Highways England’s roads plan to ensure the road network is fit for the future and safe, reliable and efficient for drivers and businesses.

In Scotland - A Freedom of Information request to Scottish Government in September 2020.

"Tell me how much we spent on cycling facilities directly and in grants to other parties in Scotland for the financial year 2019/20 or if not available for the previous financial year?"

For the financial year 2019-20, Transport Scotland has spent £325,000 on cycling / walking facilities directly. The balance of our Active Travel budget of £79,549,129.77 was distributed as grants to other parties in Scotland.

Scotland funds things in a different way to England. For example in 2020

Over £5 million in grants help get Scotland moving

Read about these projects at https://www.transport.gov.scot/active-travel/developing-an-active-nation/