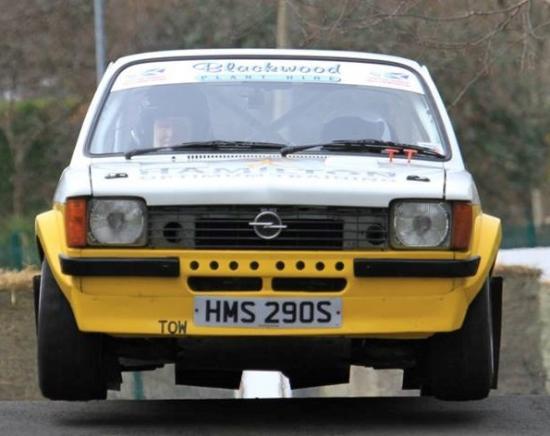 The 2nd round of the Scottish Tarmac Championship was held at Ingleston Highland Showground on 2nd April 2016. With the entries full within 15 minutes of opening and a reserve of 20 cars it was a capacity entry.

The event consists of 8 stages all held within the Ingleston Race Track, with 30 second intervals between cars it was a busy place but Dunfermline Car Club who ran the event handled it with the smooth and efficiency of people who knew what they were doing. Out of the 75 cars entered only 2 came from Caithness, James Campbell in his Peugeot 106S16 and Billy Hamilton in his Opel Kadett 2000.

Unfortunately for James and navigator Kevin McIvor the Peugeot developed drive shaft problems and they were out by stage 3. Things were better for the pairing of Billy Hamilton and Nikki Addison even with a slow start in stage 1 they then went on to set top 13th, 12th and 11th times overall and by stage 6 they were 1 second from being 2nd in Class and 11th overall. This showed how hard they were trying as they had lost 18seconds in the 1st stage to Kenneth More who was just one place above them, and the Opel had a few close moments with bales and stage furniture including a puncture which was going to prove decisive the last 2 stages.

On stage 7 it started to rain and this highlighted the difference tyres can make, due to the earlier puncture, Billy and Nikki had no soft compound tyres to put on and were left with too hard a tyre whilst 2nd place man Kenneth Moore put on intermediate tyres and pulled 6 seconds on stage 7 and a further 13 seconds on stage 8. Billy and Nikki were disappointed as they were looking good for 2nd place, until it rained but being self funded they could not stretch to new tyres. Therefore 3rd in Class 3 and 12th Overall was still a great result for the little Opel Kadett.

Class battles were also going on in Class 1 between Steven Hay and Neil Raven, Class 2 was between Sean Robson and Neil Thompson, Class 4 was between Bruce Edwards and Alex Adams and to round up the class battles in class 5 was between Ian Paterson and Alan Wallace. The Overall event winner was John Marshall in his Subaru Impreza 2000. Results can be found at www.scotresults.co.uk

The next outing for the Opel pair is the 3rd round held at Crail in Fife on June 18th. If you or your company would like to promote your business and help this rallying pair, please contact bill@hamulton.freeserve.co.uk to discuss.