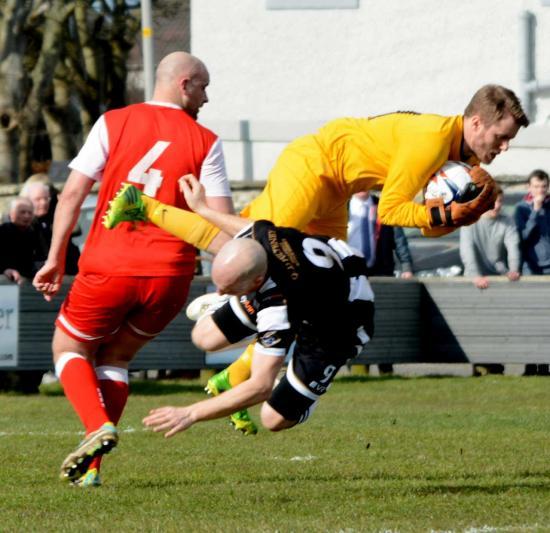 THE Scorries reversed a two-goal deficit, to grab a share of the spoils in a gutsy second half comeback.

Apart from displaying a never-say-die commitment, the draw demonstrated that Academy are closing the gap on their derby rivals, no small achievement when you consider Dudgeon Parks quality and expensive outfit.

Wick got off to the worst possible start, however in front of a near-thousand crowd, Dale Gillespie netting for Brora in the early stages. Academy withstood a lot of pressure and some nervous goalkeeping and poor passing, gave their fans a few more anxious moments.

Gillespie made it 2-0 before the break and it looked as if it was all over, especially when Academys Davie Allan was red carded in the opening minutes of the second forty five.

They say that the true hallmark of a side is the ability to dig deep when the odds are stacked against them and that's exactly what the 10-men Scorries did. Richard Macadie, who has been finding his old form in recent games, headed home, a Marc Macgregor cross to lift the flagging spirits of their fans. What a difference a goal makes to a losing team!

Macgregor turned from provider to goal scorer with a defence-splitting solo run, in the closing stages to find the bottom corner and send the Academy faithful into raptures. You could have cut the electric Harmsworth Park atmosphere with a knife as they willed their team to deliver the knock-out punch.

Wick, now 6th in the league table, are away to Rothes on Saturday.,