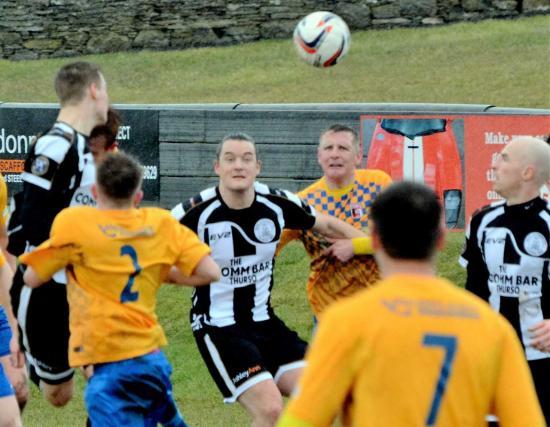 TIME was when Academy would have viewed an encounter with Locos with some trepidation...not any more.

The Scorries had Inverurie on the run, but while the visitors were down at times, they demonstrated they were not out of the game and kept coming back in an entertaining ninety minutes for the fans.

As in the recent Lossiemouth match, Wick grabbed an early advantage in the opening minutes. Davie Allan went down in a tackle from the Locos keeper, on the left, not before he prodded the ball across to Richard Macadie who was left with a simple tap-in.

Stephen Anderson nodded home to double Wicks tally and David Allan went on to make it 3-0. Locos demonstrated it was not going to be one-way traffic and netted before the break, courtesy of Steven Jeffreys.

The teams served up an entertaining ding-dong battle, in the second period, with Inverurie clawing back another goal through Colin Charlesworth to close the difference to 3-2.

However, hopes of a draw or possibly all three points for Locos, were dashed by Man of the Match, Davie Allan who netted again, to restore his sides comfy, two-goal cushion.

The visitors plight was compounded when Stephen Jeffrey was red-carded after an incident with Ross Allan.

Earlier, prior to kick-off, a minutes silence was observed for Academy stalwarts Alistair Wares and Ian Robertson.
Academy continue their demanding games schedule with a midweek clash against Buckie Thistle on Wednesday night.