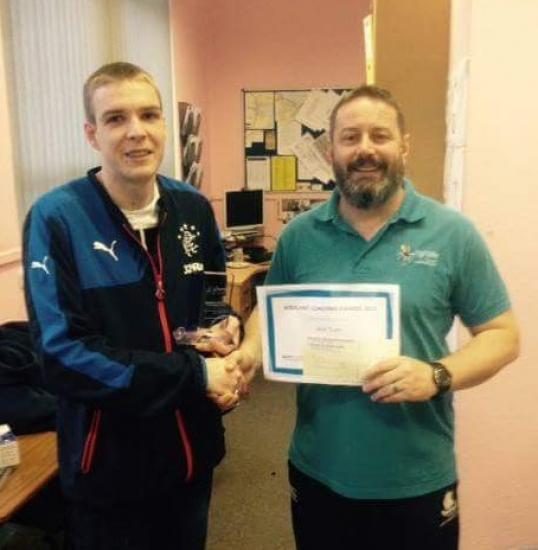 Alyn Gunn, Head coach, at Thurso Football Academy was announced Young Persons Coach of the Year at the 2015 Highland Coaching Awards. The awards are run by High Life Highland in partnership with sportscotland to recognise the outstanding contribution and significant impact of local coaches in enabling quality sport and physical activity opportunities to happen in communities across the Highlands.

Alyn has been an active coach for 16 years and has gained his C Licence in Football which for a 30 year old is quite an achievement. He works tirelessly at the Academy, 3 times a week, and does everything from the coaching to the administration. Every week this totals around 15-20 hours on a voluntary basis. Alyn makes a huge impact in the Caithness region as the Football Academy is for children as young as 3 years old up to 9 years, no other football club north of Glasgow run from the age of 3. Alyn also goes into local schools to coach nursery and Primary 1s and they love it.

Alyn has also recently written a training drills booklet, Tiny Tacklers, which is packed with coaching drills themed around popular cartoon characters to capture the imagination of young children and give them a fun introduction to the game. The booklet has been endorsed by ex-Manchester United manager Sir Alex Ferguson amongst others which is fantastic.

In May, Alyn was recognised by the Daily Record for his efforts with the booklet and was nominated nominated for the McDonalds / Sunday Mail Grassroots awards.

Alyn was presented with his award by Kenny Russell, Active Schools Co-ordinator.