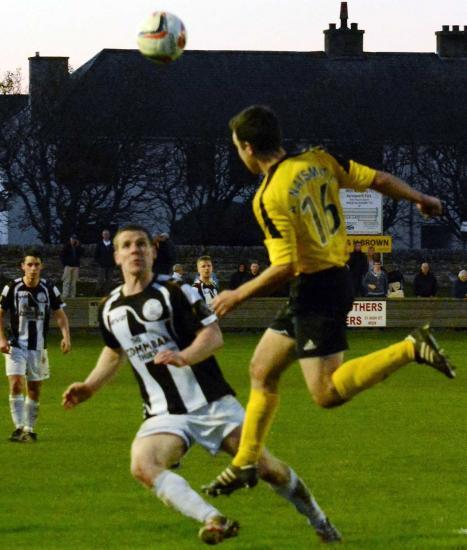 ACADEMY booked their place in the next round of the Scottish Cup with a superb performance at Harmsworth Park, yesterday.

This was Academy at their best, with all the team regulars playing attacking football with commitment and a conviction that they were going to be the side going through.

The Scorries gave the visitors a fright early on in the replay and it was only a clearance off the goal line, that prevented them from going ahead. Nairn were no slouches and made the home side work for everything, but couldn't build on a strike from dangerman Connor Genthins. A tight Academy defence can take a lot of credit from that.

Davie Allan set off the Academy fireworks display in the 18th minute and Richard Macadie doubled their advantage from the spot, not many minutes later. Nairn pressed for the comeback and it was Genthins who kept his side in touch with the game his chip going in off the cross bar.

Academy were splitting the County defence with the ease of a tin-opener and it was Gary Weir, who appeared to be in the thick of everything, that dampened Nairn hopes of a resurgence, netting in the run-up to first period.

Academy spurred on by their vocal fans, continued their attacking football in the second half and although County stuck to their task, any hope of turning things was too big a mountain to climb. Davie Allan struck again, and with minutes to go, Sam Mackay lobbed a cheeky ball over the head of the County keeper from an acute angle to rub salt in his opponents' wounds.

Academy now have to do battle with Linithgow Rose in the next round later in the month, and with the fixture again at Harmsworth Park, it promises to be a humdinger. With Rose having beaten Caley Thistle, though, Wick will have to make sure they maintain their hunger to continue their Scottish Cup run.