Huntly never really in the hunt at Harmsworth Park 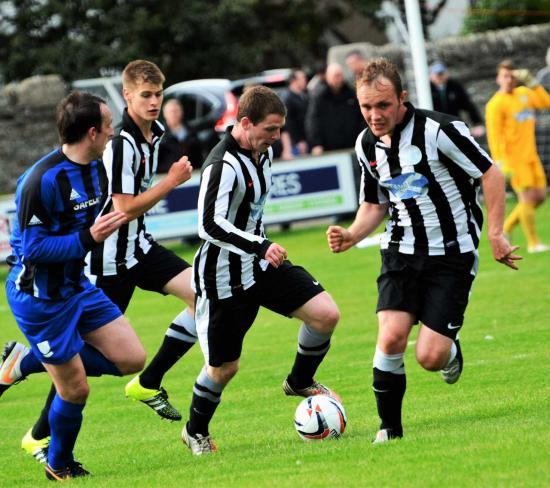 ACADEMY'S fluctuating fortunes took another turn, this time for the better, with a scintillating display that delighted their fans, desperate to see their team settle into a new season swing after an uncertain start.

While the Scorries have yet to find the elusive match play quality of consistency, the performance highlighted what the team is capable of, though it would be tempting fate to suggest that their title challenge is well and truly back on track.
Academy ran the show, particularly in the second period with a deadly combination of efficiency and flair, repeatedly scything through the hapless Huntly defence with apparent ease. Only some fine, and at times brilliant double stops, by keeper Fraser Hobday, kept their defeat down to respectable proportions.

The Huntly keeper was focused to repel Academy during early pressure but he was unable to prevent a Gary Weir goal in the 15th minute. Hobday again denied the Scorrie strikers but was powerless to stop Steven Anderson lob a superbly-placed ball over the keeper's head to give the home side a comfortable two-goal cushion at the break.

The second period was pure purgatory for overwhelmed Huntly, who had no answer to Academy's incisive, flowing football which took only a minute to produce a third goal, Richard Macadie extinguishing any shred hope of a Christie Park comeback - perhaps,offsetting the subsequent sitter he missed!

Huntly's best effort was a distance, second-half strike which rebounded off the post.