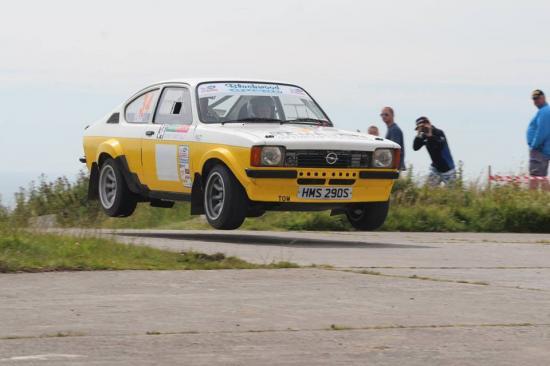 The Solway Coast Rally was held on the very, very challenging roads at Dundrennan Military Base on the 8th of August 2015.

There was a bigger entry this year and that's simply down to demand. The reputation of this event far exceeds the capacity of Dundrennan. This gave the Solway CC organizers a real headache. Do they turn away entries? Or do they reduce the mileage to fit them in? Thankfully they reduced the mileage and increased the entry to 97; this allowed Bill and Sara Hamilton an entry in their Hamilton Optimum Kadett.

This rally has everything, single track roads through forest sections, gravel tracks, concrete roads, yumps, jumps and public road sections all done using pace notes. This was Bill and Sara's first ever rally using notes so expectations were low but nerves were high. Leaving service they arrived at the start of stage 1 in the allotted time.

The start of this stage was very slippery in the forest, with a few cars already embedded in the undergrowth, then a gravel section before opening up to concrete military roads and the finish. From here they had to reach stage 2, in a certain time calculated at an average of 30mph on public roads, complete the stage, which started on concrete roads before finishing in the tricky forest roads, and then navigate back to service within time. This was the format for the rest of the day with the exception of stages 6, 7 & 8 being completed with no service. Sara took this all in her stride managing to read the notes and manage the road sections without any time penalties, even when there were some close shaves with the scenery.

Bill found it hard at first to believe what Sara was saying but as the day progressed they upped their pace catching 2 cars in stages 7 & 8. They finished the rally a very happy 28th overall and 10th in class 3. This rally has left them wanting to do more of this type of event The Rally was won by Mark McCulloch/Mairi Riddick in a Mitsubishi Evo IX.

Results can be found at http://www.solwaycarclub.co.uk/2012-solway-coast-rally/