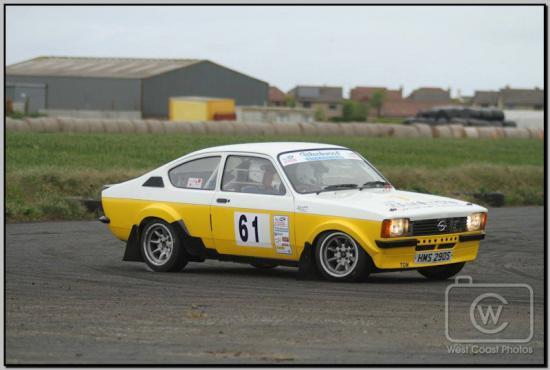 After having a disastrous 2014 and a "did not finish "result in their first rally of 2015 the father and daughter pairing of Bill and Sara Hamilton were delighted to finish the 3rd round of the Scottish Tarmac Championship, Crail Summer Stages, with a 21st overall and 5th in class. They started the rally seeded 61st out of a 100 entries as they had not registered a result for a few rallies due either to Mechanical/Electrical faults or the driver "running out of talent".

The day started well for the Hamilton Optimum Kadett climbing to 20th overall by stage 3 but on stage 4 the only shower of the day started as they were waiting on the start line and it was at that point the wipers decided to pack in. Having to drive the stage with a lack of visibility and compounded with the intercom deciding to work sporadically they dropped over 25 secs to the front runners ending that stage 26th overall. Back at service they repaired the intercom but found the wiper motor was not repairable luckily the weather stayed dry for the remaining 4 stages. Pushing on they managed to climb back up the leader board finishing 21st overall and 5th in class which considering last year was encouraging.

Brothers Euan and Gordon MacKay were both entered in class 2 and both entered in Peugeot 106's. Gordon's car was a “Cup" class whilst Euan had a higher spec model which he put to good use by leading the class unto a broken lower wishbone resulted in him finishing 25th overall and 3rd in class 2 and Gordon showing that he had lost none of his speed coming 30th overall and 4th in class.

The event was won by B Edwards/G Willcock in a Darrian GTR ,results can be found at Scotresults.com

The next event for the Hamilton Optimum Kadett is on the 11/12 July, Mach1 stages which is round 4 of the S.T.R.C way down at Machrihanish on the tip of Mull of Kintyre. Local driver James Munro in his Peugeot 205 will also make the long haul down to compete .