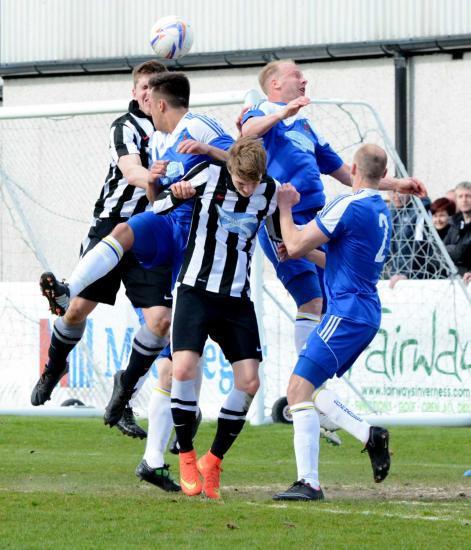 GREAT EXPECTATIONS.....but this much-hyped cup encounter proved to be something of an anti-climax at Clach's neutral Grant Street Park, yesterday (Saturday 11 april 2015).

Difficult to believe that only a week earlier, Academy held the Allan Parkers to a draw in the league.

The Harmsworth Park Club will have been delighted with the massive support from the fans who descended on Inverness in their droves, from all the airts, to support their team - the total number only rivalled by the attendance at the derby games at home, against Brora.

Vociferous support can do wonders for a team's morale but at the end of the day it's what the boys do on the park and the Scorries found themselves out-gunned by the wee Rangers, on this occasions. With the score at 1-0 in Cove's favour at the break, there was still a chance, with the fans' chant of "black and white dynamite" ringing in their ears, to turn things around.

But the second half was more of a damp squib as opposed to a fire cracker as Wick struggled to get back on level terms against a well-organised side. With the second period only eight minutes old, what Academy fans feared, came to pass with, Daniel Park heading home, to double his side's lead. Cove went on to wrap things up, underlining their supremacy with two more goals.

Probably, the worst aspect of Academy's defeat was that the Aberdonians' win was so decisive and the Scorries were unable to get onto the score sheet. Reaching a cup final is no mean achievement but having done so, naturally generates great expectations, as I said.

Difficult to believe that this was the Wick team that has so often, this season, made many an opposing side look pretty ordinary, to reach a creditable position in the league table.