Ashes triumph over The Pathetic Sharks 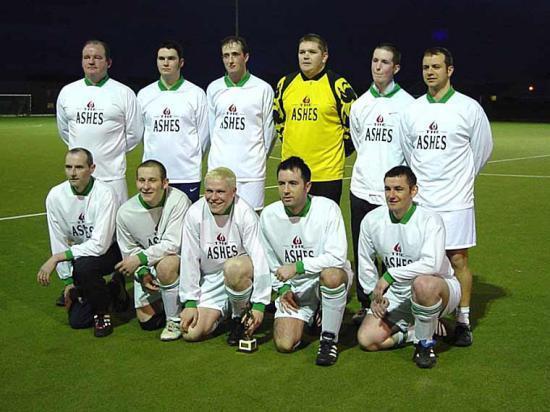 A sizable crowd turned out at Naver on Wednesday to see Ashes F.C. become worthy winners of the RMC Challenge Trophy which was filmed as part of the series "Inside Scotland".

The 7-1 scoreline was probably a fair reflection on the play as Ashes tended to dominate this sevens fixture. First half goals by Mike Macleod and 2 by Chris Dunnett had Ashes 3 nil up going in to the break. The Sharks had veteran goalkeeper Ronnie Campbell to thank for keeping the scoreline down in a man of the match performance.

Second half goals by Dunnett for his hat trick, Daniel MacKay with 2 and 1 by Dave Stockan completed the Ashes scoreline. The goalscorer for The Pathetic Sharks was none other than the shows presenter Gerry McCulloch who was making a guest appearance.

RMC also provided medals to the winners and losers in this good tempered fixture which is now likely to become an annual event.

Ormlie Motors sponsored cup competition to be held on Saturday February the 9th 2002.   The draw was made by Christine Gunn from Dounreay drawing registry.