Caithness Motocross 2009 - Round One 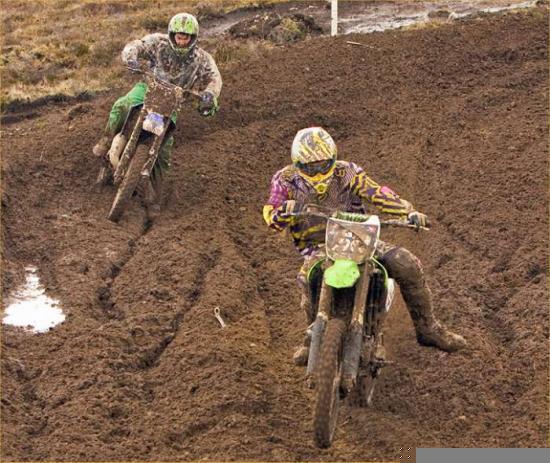 A wet and miserable start to Caithness Motocross Round One at Ravenshill on Sunday the 5th of April. An excellent turn out with some adults travelling from the south. The event was kindly sponsored by Carol and Michael MacDonald, Halkirk, allowing the winners from each category to take home some well earned silverware.

First on were the adults on the main track with Mark Sutherland racing around in spectacular form. The slippery conditions did little to hamper these dare devils, with exhilarating jumps and riding, gripping the spectators attention with their skill and endurance. The overall winner on the day was Kyle Mackie, closely followed by Mark and Iain Nicolson taking third place.

First time for an adult quad rider, Andy Sutherland at Ravenshill, hopefully this will encourage other adult quad racers to come along for the next event.

Next up were the 125cc schoolboys, giving the adults a good run for their money. Jake Anderson who is new to this class, absolutely excelling taking first place with second place going to Ross Shaw.

Racing together, the 85cc small and big wheel bikes, providing some of the most competitive riding of the day. Kyle Angus and Rikki Cormack battled wheel to wheel throughout with first place going to Kyle in the 85cc big wheel category. A storming performance by Lewis Kirk who came in third, considering it was his first race in this section. Morgan Robertson battled it out with newcomer Liam McMillan to take first place in the 85cc small wheel category.

An impressive display of speed and determination from Daniel Kirk on his 65cc bike, narrowly beating Ewan Gordon and Lachlan Jardine-Munro. Tight racing from all three boys who gave it their all, flying around the track.

Newcomer Danny Reid held up to Jack Duffy and Ben Mackenzie in the Auto Quad section, providing some competition for the infamous duo. Jack came out on top, closely followed by Ben and Danny.

Finally newcomer Troy Anderson took first place in all three races leading the group from the start to the chequered flag. Liam Mackay and Jak Murray battled through the mud to take second and third place.

Caithness Motocross Club had two days of excellent and close racing a few weeks ago at the Ravenshill Track.   The weather was dry, although dusty, for both days.
[Motorcycles]
8/3/2009

A fantastic day to be had at Ravenshill on Sunday the 1st of March for Caithness Motocross Club annual Funday.  Lots of new faces as well as the old faithfulls, beautiful sunshine and the track was surprisingly dry considering the weather.
[Motorcycles]
6/7/2008

The early mist burned off last Saturday and Round 3 of the CMXC championship went ahead at the Ravenshill track, the event was kindly sponsored by Robert Menzies Transport of Bonnybridge which allowed all of the riders to take home some well earned silverware.  Every class displayed very close racing throughout the day which in turn kept the parents and spectators engrossed.
[Motorcycles]
28/4/2007

The 2007 season kicked of on Sunday the 22nd April at the Borgie Motocross track to the west of Bettyhill.  A very good turnout of new & old members turned up to race at the well-prepared venue and they all produced some very exciting racing throughout all the classes.
[Motorcycles]
17/5/2006

Just a taster of what is ahead this summer for the Caithness Moto X Club.   The first event is on Sunday the 18th June at the Gala Track, Scrabster Farm by Thurso.