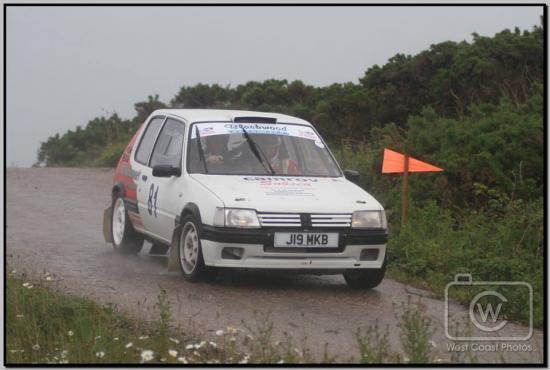 With their experience of the inaugural event last year, Dunfermline Car Club had ambitious plans for this year's event. Eight stages were planned for Saturday11 July, four long ones using the taxi-way and perimeter roads and four short ones using a 0.8 mile narrow road that dipped and turned through the dunes at the north of the site, including one very tricky, hidden Square Left over a brow.

Four long stages on Sunday the 12th would bring this year's event to a conclusion. This produced a thrilling end with the closest finish yet, after 72 miles of stages, the winners' margin on this year's Mach1 Stages Rally was ONE second. Going into the final stage, the Lotus Exige of Alistair and Colin Inglis was dead level with the Ford Escort Mk2 of Gary and Gordon Adam, at the end of the final 8.7 mile was a one second victory for the Inglis brothers.

Two local crews travelled to this long away destination, James Munro/Richard Wardle in the Peugeot 205, Bill & Sara Hamilton in their Opel Kadett. Both had incidents even before reaching the event with Bill having a trailer blow out and James tow van springing a water leak which resulted in numerous water stops until a repair could be completed.

The Saturday started of in sunshine with both crews making their way up the leader board, the Hamilton Optimum Kadett was seeded at number 99 but by stage 4 they were up to 23rd overall, James was seeded 81 and was sitting 41st, then the torrential rain came and lasted for the remaining 4 stages of the day. With no wet tyres both crews found the limits of slicks with the Bill and Sara having a very lucky escape with a tonne bail only because someone else had hit it!! https://www.youtube.com/watch?v=OwHkN_3AsUs

Sunday morning thankfully was dry and both crews climbed back up the leader board but with loosing so much time on the wet Saturday it was always going to be an uphill struggle. James and Richard scored a very creditable 44th overall and 7th in class 2 whilst Bill and Sara finished 33rd overall and 8th in class 3.

All results can be found at http://www.scotresults.co.uk/mach2015results.pdf