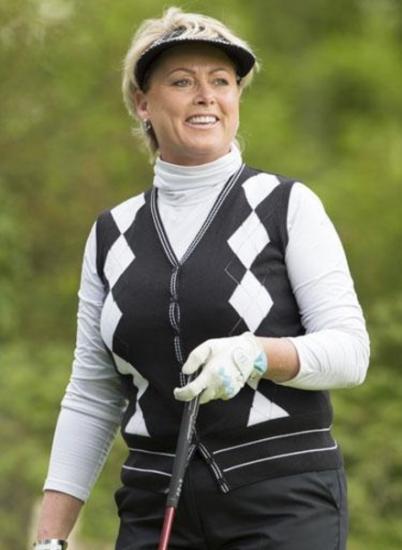 Staffordshire's Julie Brown will bid for a rare double when she tees up in the English senior women's stroke play championship at Knaresborough, Yorkshire, from June 17-19.

Julie (Trentham, Image © Leaderboard Photography), won the English senior women's amateur at her first attempt in April. Now, she will attempt to follow in the footsteps of Hampshire's Chris Quinn (Hockley), who is the only player so far to win both titles in the same season, achieving the feat in 2009.

The championship will also decide the England team for the European senior ladies' team championship, which will be played in Austria in early September. The top six players on the senior order of merit after the strokeplay will make up the side.

At the moment, those places are held by Julie Brown, Chris Quinn, Debbie Richards of Surrey, Katherine Russell of Sussex, Lulu Housman of Middlesex, and by Janet Melville of Lancashire and Jane Southcombe of Dorset, who currently share sixth place. All are in the field at Knaresborough.

Among the others in the hunt are Cheshire's Sue Dye, who is defending the title she won last year at Shanklin and Sandown on the Isle of Wight, where she scored a runaway seven-shot victory.

The championship has attracted a strong field which includes 13 Yorkshire players, among them the county vets' champion, Carolyn Kirk of Ganton, and the runner-up, Pat Wrightson of Huddersfield. Knaresborough will be represented by two players, Brenda Moore and Bridget Tasker.

The championship will be played over 54 holes. The full field will play 18 holes on each of Tuesday and Wednesday, June 17 and 18. The top 36 players and ties will qualify for the final 18 holes on Thursday June 19.

Spectators and welcome and admission is free.