Jamie puts the Allan Parkers in a pickle 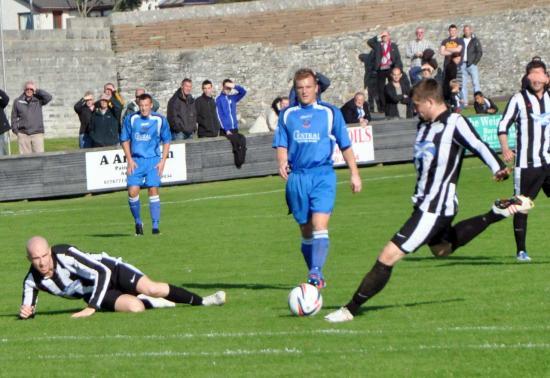 WICK missed the chance to hold onto their top table spot, albeit jointly with Brora, but to be honest they didn’t really look like matching the Dudgeon Park outfit in the league table, on this display against the league champions and slipped to second place.
It was only a superb, 71 first-minute rocket from all of 30 yards out, from Jamie Pickles which - as it turned out - saved the Scorries bacon, Cove equalising in the final phase.
The wet and windy weather in the morning gave way to bright sunshine in the afternoon but Wick was unable to turn up the heat on a slicker side that always looked dangerous on the break, but couldn’t capitalise on it, in the final third... until their crucial goal late-on.

Academy lacked their customary sparkle that always makes visitors to Harmsworth park apprehensive, possibly due to a hangover from that Brora cup battering but, what a difference a goal can make and when Man of the Match, Pickles did the business, some of Wick’s old magic returned. Academic, if you’ll pardon the pun...Cove got their equaliser courtesy of Barry Stephen header and that, was that, with a result that was probably” fair doos”.

Consolation?... the Scorries' marathon record of home wins supremacy, survived.
Some players, who were contrastingly on a ‘high’, was the Wick High School team who lifted the North of Scotland Schools’ Cup, beating Millburn Academy, earlier in the day. They paraded their trophy in a lap of honour at half-time.