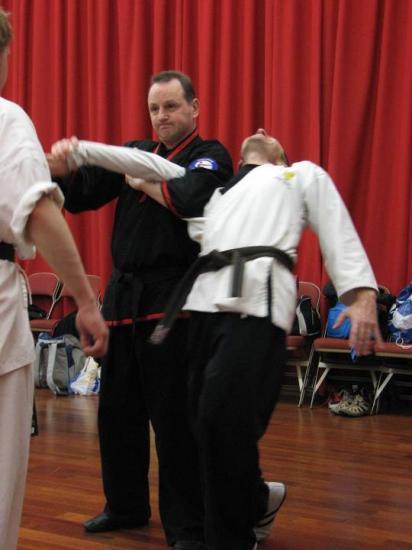 As well as the one-day seminar the two Grand Masters instructed at a regular KSD training session in Castletown and during the weekend KSD Chief Instructor Vince Tait was under intense scrutiny being graded to Master level. Following the award Vince said "This is a real honour for me and I am delighted to have been deemed worthy of being promoted to Master," Vince went on to say "I feel very proud, this is also a tribute to our club and the members who work hard as a team to support our activities".

Grand Master Soke Gunter Bauer said "Sabumnim Vince Tait runs a great club in the far North of Scotland and brings an array of martial arts skills from a number of disciplines to KSD Martial Arts. Vince has dedicated a great deal of time both training and instructing in over thirty years of Martial Arts and has demonstrated the qualities required to become Master".

KSD Martial Arts club secretary Gary Beardsley said "It was great to work with the Grand Masters in Caithness, they travelled up from Manchester and as a club we feel that it is important that our students have access to instructors of this calibre without having to leave the area. Over 70 Martial Artists from Caithness and throughout the Highlands including the Scottish Kempo Academy, Scottish Fighting Arts Society, and Bass Korean Martial Arts School attended the event."

When asked about his experience of coming North Grand Master Soke Mark Kemp said "We had a fantastic time and were impressed with the students and their level of commitment, I congratulate Sabumnim Vince Tait on his success and promotion to Master."

KSD Martial Arts meets in Castletown, Thurso and Halkirk, it is a modern scientific form of non-competitive self-defence with traditional values, suitable for all ages and physical abilities for more information go to www.kongsoodo.co.uk or call 01847 821 365.