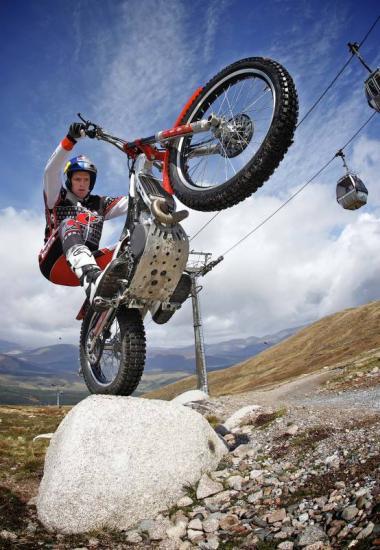 Next weekend Sixty of the World's best motorbike trials riders from fifteen countries around the globe will descend upon the Nevis Range for the UK leg of the SPEA FIM Trial World Championship - the biggest, the most important and the best motorcycle trial competition series on the international calendar.

Not since 1992 has Scotland hosted an FIM World Trial and everything is now in place for two days of awesome and hotly contested competition for valuable points towards the 2010 World Pro (male only at Fort William), World Junior (male and female) and World Youth (male and female) titles..

With this being the last two day event in the 2010 calendar, fans will have the added bonus of watching spectacular World championship action on both Saturday and Sunday. In this extreme test of riding skill and balance over observed obstacles riders will have to negotiate some seemingly impossible hazards including steep gullies, slippery rock steps, rocky streams and a boulder-strewn gorge within Leanachan Forest, on the slopes of Aonach Mhor and in front of the grandstand.

Thousands of spectators are expected to attend the biggest and most spectacular display of trials riding ever seen on British soil. The main competition days will be Saturday and Sunday with Friday's timetable offering a mixture of unique and exclusive activities including autograph and meet and greet sessions with the world's top riders, official practice, demonstrations from You Tube street trials phenomenon Danny MacAskill and the return of the legendary 80's TV show Kick Start for a one off Highland fling.

Following the action could not be easier with all sections being close to or in the main event village and the top gondola station. A big screen will show live footage, results and some exclusive pre-recorded material all weekend.

Motorcycle trials is unique in the World of motorsport. It is the only discipline where the winner is decided on skill alone. It is a test of riding skill and balance over observed sections. When competitors ride the incredibly tough sections their feet must remain on the footrests of the motorcycle. Sections vary in length and severity, and riders are penalized if they put their feet down to help them ride the section, and more so if they fail to negotiate the section in its entirety.

For more information and to buy tickets go to: http://ukworldtrial.com/.

The 2010 SPEA FIM Trial World Championship at Fort William is supported by EventScotland, Highland and Islands Enterprise and The Highland Council together with Nevis Range, Alcan, Forestry commission Scotland, VisitScotland, TMX and Hope.

The sport originated in the UK nearly a century ago and has enjoyed a long association with Fort William and Lochaber - The Outdoor Capital of the UK - as host to the World famous Scottish Six Days Trial. This year's event will be staged in the area from 3 to 8 May.

As a venue for the 2010 SPEA FIM Trial World Championship Nevis Range is exceptional. It is home to unrivalled natural trials terrain anywhere in the World. It offers both technical and challenging sections to test both man and machine to the full, guaranteeing world class action. The venue also has a rich motorcycle history as host venue for the World-renowned Scottish Six Day Trial making it a Mecca for trials riders and fans alike. This combined with good local accommodation, extensive local amenities and facilities, excellent site infrastructure and a proven track record of hosting other World status events makes Nevis Range the perfect stage for a winning World Championship event.

World Championship Classes
World Pro - As the name suggests, this is the World's elite - the professionals, the best on the planet.
World Junior - This class is for riders aged 18 to 23 years old and is a feeder class for the top category.
World Youth - Riders in this class are restricted to 125cc machines, and must be aged 16 to 18 years old.

For more got to the following web sites -
www.ukworldtrial.com