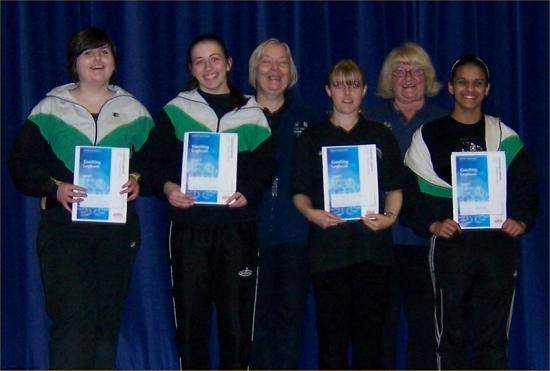 Marion said after the exam ‘I was very impressed by the commitment, dedication and ability of such a young group of girls. Caithness Rhythmic Gymnastics can only benefit from such a strong team which is led by Club Coach Diane Gibson I would hope to see them all as great coaches of the future. I have thoroughly enjoyed my visit to Caithness and I hope to be back’

Diane said ‘it was a pleasure and a privilege to welcome someone of Marion’s calibre to Caithness and Caithness Rhythmic Gymnastics. We were all delighted when she said she would make the long trip up north, we hope to have her back sometime in the future.

The Rhythmic Gymnastics section of Caithness Gymnastics Club recently held their 3rd annual display evening, to which parents, family and friends were invited.  The members of the section performed a wide variety of group routines to a very appreciative audience.
[Gymnastics]
8/5/2009

Members of the Caithness Gymnastics Club took part in GymfestINverness held recently at the Bught Leisure Centre in Inverness.   This Gymfest, which is unusual as it is the second to be held in one year, was hosted as part of Highland 2007: the year Scotland celebrates Highland culture.