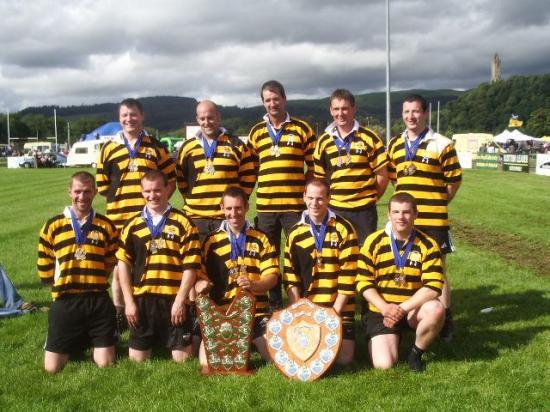 Halkirk Tug O' War team returned from the Stirling Games on Sunday 9th July as Scottish Champions in two weight categories. The 680kg title was retained and the 640kg title was added this year. The lads just missed out on a hat-trick of titles after losing in the final of the 720kg weight.

Due to a lack of teams in the 560kg, the 680 kg category quickly followed. The Halkirk team this time coached by Bruce Swanson Snr, was Andrew Swanson, Graham Gunn, John Murray, Bruce Swanson Jnr, Johnnie Campbell, Willie Budge, Danny Budge and Michael MacGregor. Halkirk once again reached the semis with no ends lost and met Strichen yet again.

The final was a repeat of the 640kg with Cornhill the opposition. Having lost the first end, Halkirk regrouped to take the next two and be crowned Scottish Champions again. This also means the team will represent Scotland at the British Championships to be held in Belfast on the 12th and 13th of August. The lads will also pull as Halkirk in the club competition in Belfast. The 720kg was the last competition of the day. After 1-1 draws with East Kilbride and Cornhill, Halkirk beat Kinneff and Strichen 2-0 to secure another semi place.

After disposing of Strichen yet again, the lads met Cornhill in the final. Again the first end was lost but the lads rallied to win the second. However Cornhill took the third and deciding end to win the category with Halkirk collecting the silver medal. The coach in this category was Andrew Swanson with a team of Graham Gunn, , JohnMurray, Bryan Sinclair, Bruce Swanson Snr, Johnnie Campbell, Willie Budge, Danny Budge and Michael MacGregor.

Winning the Scottish Championships this year also results in qualification for the World Championships to be held in Holland from 14th - 17th September. However due to work commitments it is unlikely the Halkirk team will be able to make the trip.